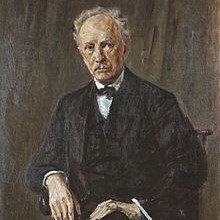 Richard Strauss began piano lessons at the age of four, began composing at the age of six, violin at age eight, and formally studying composition at age eleven. In 1882, Strauss joined the amateur orchestra Wilde Gung’l, which his father conducted. It was here that Strauss gained practical knowledge of orchestration and his first orchestral pieces were composed specifically for this group to perform which included marches, overtures and two symphonies.

That same year Strauss entered the University of Munich, but only stayed for the winter session. Despite his short enrollment, Strauss experienced an intellectual awakening in which his curiosity about the world around him was heightened. He delved into Schopenhauer, Shakespeare, and others. In 1884, Strauss made his debut as a conductor when he conducted his own original composition, the Suite in B flat.

Over the next several years Strauss discovered the music of Liszt, which left a lasting impression on the young man, inspiring him to write his first tone poem, Macbeth, in 1888. The next year Strauss was appointed as the Kapellmeister to the Grand Duke of Saxe-Weimar-Eisenach to which his student (and future wife) Pauline de Ahna followed him. He soon after premiered his works Don Juan, Burleske and Tod und Verklärung. In 1894 his first opera, Guntram, received lukewarm reviews. In 1905 the premiere of Salome reestablished the public reputation of the composer, this time as one of the most modernist composers.

Strauss moved to Vienna during World War I where he enjoyed the musical life there conducting and composing. During the 1930’s, Strauss fought to keep his political self separate from his personal and professional lives, however he found them increasingly intertwined and performances of some of his compositions were banned despite his efforts to stay in the good graces of the government.

As World War II continued, Strauss’s finances were frozen, and his health declined. He and his wife eventually fled to Switzerland, surviving off of the sale of compositions and sketches.