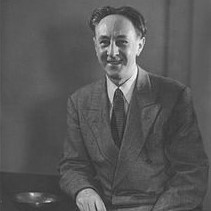 Bohuslav Martinu was the leading Czech composer of the mid-20th century. While he studied violin at Prague Conservatoire, he was dismissed for “incorrigible negligence.” While continuing his studies privately he joined the Czech Philharmonic. While touring he discovered the music of Debussy and he left Prague to study with Roussel in Paris. A member of Parisian culture, Martinu found inspiration in the music of Stravinsky, Les Six and jazz. In the 1930’s he adopted a neoclassical idiom and explored the forms of concerto grosso. Notable works include surreal opera Julietta and his Double Concerto. The fall of Czechoslovakia to communists in 1948 prevented his return to his homeland. His ambitious music of the 1950’s, which include his Fantaisies Symphoniques (No. 6) employed dreamlike neo-impressionist color. At his funeral in 1959, the eulogist commented on Martinu’s works by saying, “his music is the music of our times, because it expresses profound basic problems; it bears the stamp of individuality, which enables it to ring out among all the rest, and guarantees that he will not be forgotten.”