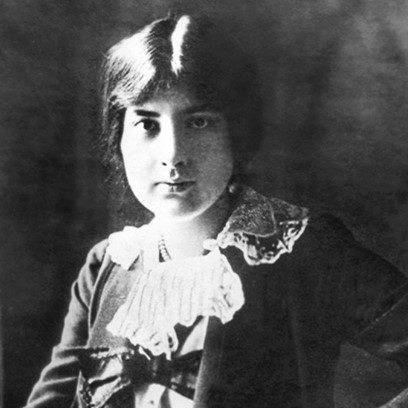 Marie-Juliette Olga Boulanger was born into a musical family. Her grandfather was a cellist, her grandmother a famous soprano (Marie-Julie Boulanger, née Hallinger), her father a composer who had won the Prix de Rome in 1835. Her mother, Countess Raissa Myshetskaya, was a professional singer, and her sister was Nadia Boulanger, who became famous as a teacher, particularly to a generation of American composers.

Lili, as she was called, suffered a nearly fatal case of pneumonia when she was two years old. Although she survived, it would appear that her immune system was compromised, for she was a frequent sufferer from various illnesses. She was deeply attached to her father, who had been 77 years old when she was born. Inevitably, he died when she was young, only six years old. The family was closely involved in Parisian musical life; Fauré was a frequent house guest.

Their mother gave both sisters beginning music lessons, but they went on to study with eminent musicians. Lili took lessons from the great harpists Marcel Tournier and Alphonse Hasselmans, and also studied violin, cello, and piano. At the age of 16 she began studying composition. Her primary teachers were Georges Caussade and Paul Vidal. She made such progress that her elder sister, Nadia, realized she could not match her talent, and changed her career to teaching. Lili was admitted to the Paris Conservatoire in 1912. In May of that year she entered the famous Prix de Rome competition for composers, but fell ill during the strenuous period of composition and had to withdraw. When she competed again in 1913, she became the first woman to win the coveted prize, being named co-winner with Claude Delvincourt. Her winning composition was a cantata, Faust et Hélène.

Measles prevented her from traveling immediately to Rome, but she arrived there in the middle of March, 1914. She faced the hostility of the director of the French Academy there, Albert Besnard, who was sure the mere presence of a woman among the residents would destroy discipline. She returned to France for a family vacation in July, and remained in France when World War I broke out, in order to give what help she could to the war effort. Back in Rome in 1916, she began work on an opera, La Princesse Maleine, based on a play by Maeterlinck, it was said that she identified with the lonely heroine. She returned to Paris due to illness, then returned to her family home in Mézy and died there in March, 1918.