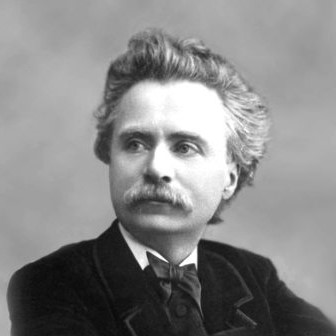 Edward Grieg, renowned Norwegian composer, conductor, and pianist, is frequently considered Norway’s most celebrated citizen. Grieg is best known for his Piano Concerto in A minor and the incidental music in Peer Gynt. His compositional voice was lyric and found inspiration in folk tunes built on the Romantic tradition.

Grieg’s early compositional voice was very Romantic in style. Once out of the Conservatory, Grieg’s folk influences is most prevalent in his use of harmony which continued to evolve throughout his career. Much of his early music found inspiration from his wife, Nina, whom Grieg described in a letter to his biographer as “the only genuine interpreter of [his] songs.” In middle age, an Impressionist influence found its way into Grieg’s compositions with it being most visible in some of his later works in the 1890’s.

In 1858 his parents sent him to the Leipzig Conservatory to begin continue his musical studies. After a quick dislike of his first teacher, Grieg petitioned to be reassigned to a different piano instructor. Wenzel was a close friend and champion of Schumann who instilled in the new pupil a love for Schumann that would resonate throughout his life.

In 1860 Grieg fell ill and as a result developed respiratory troubles which would plague the rest of his life. He spent the summer in Norway with his family to recuperate from the illness and returned to the Conservatory in the fall. He formally left the school in the spring of 1862 and returned to Norway. Feeling that his musical training was not complete, Grieg relocated to Copenhagen.

In 1864, Ole Bull introduced Grieg to Norwegian folk music and the composer began to develop an enthusiasm for Norwegian culture. Despite having grown up in Norway, Grieg’s placement in the middle class along with his family’s traditions had exposed him to mainly Dutch culture and very little Norwegian.

During the following years Grieg gained himself the support and encouragement of Liszt, government funding for an Italian tour, discovered Lindeman’s folksong collection Aeldre og nyere norske fjeldmelodier, and began collaborating with Bjørnson on a number of vocal pieces as well as making plans with him for an opera with a Norwegian subject (which was eventually abandoned). Grieg began to write incidental music for Peer Gynt by the invitation of Ibsen and, as it required more time than he originally anticipated, received a government grant allowing him the freedom to compose and finally completed the score by 1875 with its first stage performance taking place in early 1876.

As his personal life became strained in 1883, so was his work as a composer. He left his wife and began a long concert tour. A year later, family friends were able to reconcile the couple. After a four month trip to Rome, the couple settled at Troldhaugen where they built a new home and it became their home for the remainder of Grieg’s life. The last twenty years of Grieg’s life was quite routine: Spring and early Summer were mostly spent composing new works and revising old, late Summer would be a tour on foot through the mountains, and concert tours occupied Autumn and Winter where he would only perform his own music.