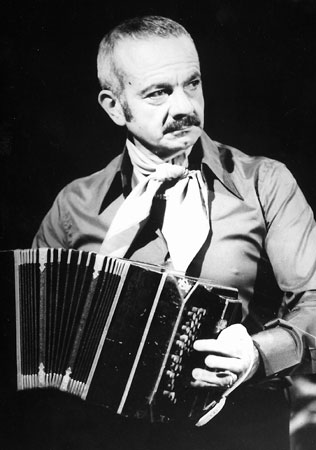 Astor Piazzolla was an Argentine bandoneon player, and tango composer. He was known for being the main proponent behind the evolution of Argentine Tango towards the innovative Neuvo Tango style.

Astor Pantaleón Piazzolla was born on 11th March 1921 in Mar del Plata, Argentina. When he was four years old, his parents moved to New York City and became busy with work. Thus the young Piazzolla was all by himself, listening to his father’s tango orchestra records of Julio de Caro and Carlos Gardel. When Piazzolla was eight years old, his father bought him his first bandoneon. In 1933, he started taking music lessons from Bela Rida, who taught Piazzolla the basics in music theory and composition. Rida also taught him how to play many of Bach’s songs on the bandoneon. Piazzolla would even meet Carlos Gardel in 1934. Gardel was impressed by him and had invited Piazzolla to join him on a tour. Piazzolla’s father was against the idea because of his son’s young age, however, this proved to be a stroke of luck for the young boy, as Gardel’s entire orchestra passed away in a plane crash on that very tour. In 1939, Piazzolla joined the orchestra of the famous Anibal Troilo, who would later on be known as the composer of the orquesta tipica. Piazzolla received a sizeable commission for his works with the orchestra, which he used to pay for his music lessons with Alberto Ginastera.  Piazzolla graduated to arranging works for Anibal Troilo. He then started work with Francisco Fiorentino in 1944, with whom he wrote his first two instrumental tangos, ‘La Chiflada’ and ‘Color de rosa’. Piazzolla also wrote his ‘Preludio No. 1 for Violin and Piono’ and ‘Suite for Strings and Harps’ around the same time. It was in 1946 when he formed his own orchestra named ‘Orquestra Tipica’ with whom he composed ‘El Desbande’. In 1954, he started formal training with the great Nadia Boulanger at the celebrated Fountainebleau Conservatory in Paris. During this time he learnt counterpoint while being exposed to various types of music, including the jazz of Gerry Mulligan. Then in 1955, Piazzolla formed the Orquesta de Cuesdas, with whom he introduced the revolutionary Nuevo tango style, which looked at harmony and melodic structure from a slightly different angle. One of his most famous tango’s was written in homage to his late father and was named ‘Adios Nonino’. In 1965, his album ‘El Tango’ received considerable attention.

Astor Piazzolla also had great success writing film scores. He won the French Critics Cesar Award in Paris for ‘El Exilio de Gardel’. He wrote for more than forty five films and released many more albums, the total number of which would exceed sixty. His works in Nuevo Tango and jazz made him one of the most prolific musicians of his time. He died on 4th July 1992.