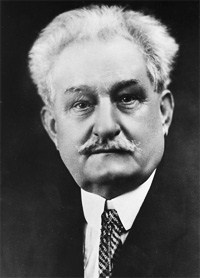 Czech nationalist composer, Leoš Janáček spent his childhood believing that he would follow in his father’s footsteps as a music teacher. In 1865 he began his music studies at Brno where he was also a choirboy. By 1872, Janáček was a junior master at Brno teachers’ training college which he followed by time spent at the Prague Organ school in 1874, the Leipzig Conservatory in 1879 and then the Vienna Conservatory in 1880. Returning to Brno as recognized as a full music teacher, he founded the Brno Organ School in 1881 and, while holding his leadership role there, he was also a professor of composition at the Prague Conservatory from 1881-1888. Also during this time, Janáček collected folk music with Bartoš and published the journal Hudebni Listy (Musical Pages).

He taught most of his adult life and lived in obscurity as a composer until his opera Jenůfa was premiered in Brno in 1904 and, later, Prague in 1916 which brought Janáček international recognition as a composer. He developed an amorous admiration for Kamila Stösslová who, while thirty five years younger than he, became his muse and her influence upon him can be seen in his works, with the majority of his catalogue being composed during the twelve years after Janáček formed a friendship with Kamila.  His attraction to her can be seen in the song cycle Zápisník zmizelého (The Diary of One who Disappeared) in which a young farmer deserts his home and family to live with a dark skinned gypsy woman. His ninth opera Z mrtvého domu (From the House of the Dead) was his last and, unfinished, was published posthumously in 1930, as Janáček died in 1928 after catching pneumonia.