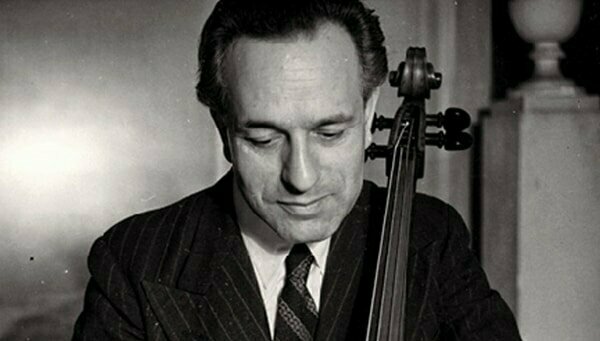 Gaspar Cassadó was born in Barcelona in 1897 to a musical family. Joaquín, his father, was a composer and an organist. Cassadó was nine years old, when he played his first public performance: the great cellist Pablo Casals in attendance. Quite taken by the youngster’s talent, Casals offered to take Gaspar as a student, although at the time he had only three students. Gaspar worked with Casals and studied composition with French Impressionist Maurice Ravel, and fellow Spaniard, Manuel de Falla.

The two brothers, Agustin and Gaspar, and their father Joaquín, concertized widely as a trio until the outbreak of World War I. They were forced to return to Barcelona, but Cassadó’s cello career flourished back home. He performed at the Palau de la Música Catalana with eminent artist Arthur Rubinstein and by 1921, he was recognized as one of Spain’s leading musicians. Cassadó performed in concerts with the Barcelona Symphony showcasing music of leading Spanish composers.

After the war Cassadó toured France and Italy, and his visibility as a composer increased. In 1928, Cassadó’s composition Rapsodia Catalana was premiered by the New York Philharmonic under the baton of William Mengelberg. Casals began to conduct several of Cassadó’s orchestral works, such as the Variaciones Concertantes for piano and orchestra with his newly formed Orquesta Pau Casals. Cassadó appeared often as guest soloist performing most of the standard repertoire, Beethoven Triple Concerto, Strauss Don Quixote, and his own concerto, Concerto in D Minor, a work he dedicated to Casals.