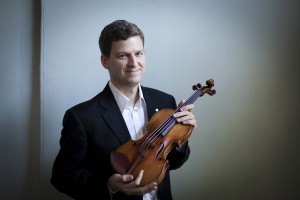 My Bartók obsession has been going full tilt for quite a number of years now, and shows no signs of abating. Luckily, as a violinist I have a lot of Bartók to play; 2 wonderful concertos, 6 string quartets, various folk-music-related pieces, a magnificent solo sonata, and the two amazing sonatas for violin and piano. I’ll be performing the 1st Sonata on January 22 at the opening concert of the Seattle Chamber Music Society’s Winter Festival.

Béla Bartók’s music is wildly varied in mood and complexity, but always sounds uniquely his own. Early in his career, his music was heavily influenced by the late romantic ideals of Liszt and Strauss; in his late life, his music often had a serenity and beauty that belied the complexity of the composition and the technical virtuosity required to play it to its full potential. It was in his middle years, approximately 1915-1930, that Bartók was at his most avant-garde and experimental. His willingness to push the boundaries of tonality was never exceeded by the two wildly experimental sonatas for violin and piano, written in 1922-23 for himself and the Hungarian violinist Jelly D’Arányi.

Bartók’s obsession with folk music started in 1904 when he heard a peasant woman singing. Shortly thereafter, he embarked on the first of many journeys to the countryside to collect and study indigenous music, a project that, in my mind, is one of the most important musicological studies of all time. His work to preserve this fascinating music of cultures ranging from Hungary and Romania all the way to Northern Africa could not have come at a better time; reliable (if rudimentary) recording equipment was only recently available, but just over a decade later the world changed forever with the outbreak of the First World War. Much of this music, and musical tradition, would have been lost to history forever if not for Bartók efforts.

This exploration of folk music profoundly influenced Bartók’s own compositions. He wrote a great number of folk song arrangements and folk-music-related works, but even in his works in “traditional” forms – concertos, sonatas, quartets – the influence of folk music is plainly heard. In the first violin sonata, it is fascinating how he combines an obvious ambition for harmonic experimentation with elements that are clearly influenced by eastern folk traditions. I believe that is a large part of what makes the piece so successful: the tonal language can often seem unfamiliar, exotic to the point of austerity, or even downright confusing upon first hearing, but the infectious rhythms and the intensely personal narrative of the solo lines are elements with which one can immediately connect.

As with a fair amount of Bartók, the musical subtext, the “feel”, is something terribly elemental, something almost distressingly personal and familiar. The second movement of this sonata goes to emotional places that few pieces of music access.

I’ve had the great pleasure of working on this sonata extensively with my wonderful colleague Andrew Armstrong (we recorded it as part of our set of Bartók’s complete works for violin and piano), and we are both tremendously excited to present this very special piece to the SCMS audience.