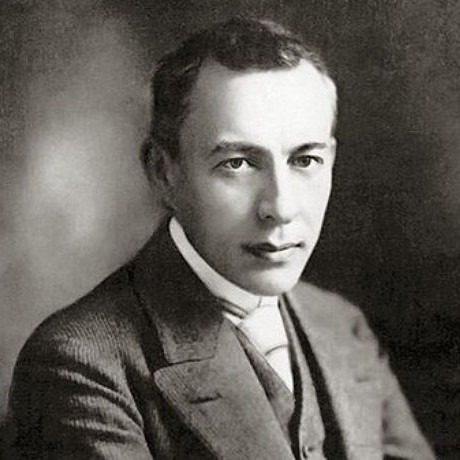 Sergei Rachmaninoff was born April 2, 1873 in Oneg, Russia. Growing up, Rachmaninoff saw his family fortune squandered away by his father, emotional strain tear his parents apart, and his sister passing away from disease. He began his study of piano with his mother and then a student at the conservatory at St. Petersburg, where he would become a student himself. During the separation of his parents, his mother became unable to adequately supervise his academic efforts and, when he was at risk of losing his scholarship to the conservatory due to poor academic performance, he was sent to live with Nikolay Zverev and study with him at the Moscow Conservatory. It was here that Rachmaninoff received a rigorous musical training that would shape him into the artist he became.

After graduation, Rachmaninoff signed a publishing contract and went on to compose the piano prelude in C# minor, his best-known composition. In 1896, the disastrous premier of the Symphony no. 1 in D minor sent his career into despondency until he received a revival by wealthy industrialist Savva Mamontov when he was engaged by the Moscow Private Russian Opera for the 1897-98 season as conductor. With his confidence revived, Rachmaninoff completed his Cello Sonata and his Piano Concerto No. 2 in C minor, Op 18 in 1901 and in 1902 found himself married to Natal’ya Satina after a three year engagement.

As a result of the 1917 Russian Revolution, Rachmaninoff lost his estate and he took his wife, two daughters, a few sketchbooks of his compositions and his unfinished opera The Golden Cockerel and left Petrograd for Helsinki. In 1918, Rachmaninoff departed for New York in search of a solution to his financial concerns. In 1921, Rachmaninoff bought a house and his family worked to recreate the lifestyle they’d lost by observing Russian customs. While in America, Rachmaninoff maintained a busy conducting and performing schedule and between 1918 and his death in 1943 he completed only six compositions.

Known for his rhapsodic piano playing (and large hand stretch), his playing, like his conducting, was marked by precision, rhythmic, drive, a refined legato, and an ability for complete clarity in complex textures. Rachmaninoff also possessed an uncanny memory- being able to recreate a piece only heard once. This aided Rachmaninoff when, after moving to America, he had to learn much of the basic piano repertoire in his mid forties. Rachmaninoff’s compositional style showed first the influence of Tchaikovsky and later his own voice. The piano is used extensively throughout his compositions and he strove to explore fully the expressive possibilities of the instrument. Rachmaninoff possessed a great command of counterpoint and fugal writing with chromatic counterpoint being a being very characteristic of his compositions.