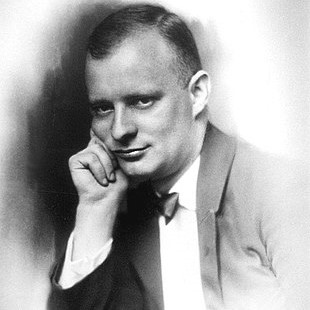 Paul Hindemith was a German composer, teacher, violinist, violist, and conductor. He came from a line of shopkeepers and craftsmen who, on his father’s side, also shared a passion for music.

Hindemith’s musical education was pioneered by his father. Through special arrangement, Hindemith attended the Conservatory for free where he concentrated on the violin.

He joined the Frankfurt Opera Orchestra in 1914 as first violinist. In 1917 he joined a regiment in Alsace (later relocating with them to Flanders) where he was assigned to the regimental band, playing the bass drum. During the war, he formed a string quartet while in the army and continued to compose. At the end of the war he returned to both the Frankfurt Opera Orchestra and the Rebner Quartet as a violist.

Hindemith’s post-war composition output was immense including one-act operas, chamber music, piano music, vocal works, parodies, entertainment music, and film scores in which he abandoned the Romantic style he had embraced before and dove into Expressionism.

In 1924, Hindemith married trained actress and vocalist Gertrud Rottenberg, a descendent from one of Frankfurt’s most respected families.  In 1927, Hindemith was invited to teach composition at the Berlin Musikhochschule. Discouraged at the lack of adequacy of textbooks, he began research in music theory and acoustics including learning Latin and mathematics to help him read older texts on the subjects. He also took an interest in new media and became one of the first to offer classes in film music.

The election of 1933 brought the National Socialists to power and Hindemith questioned the relationship between art and society. In April of that year he learned that half of his compositional output had been banned and many of his Jewish colleagues lost their positions. Writing his own libretto for the first time, Hindemith began work on the opera Mathis der Maler which explored the problematic relationship of politics, power, art and personal responsibility in a historical setting delivering the message that the artist who betrays his genuine gifts is socially irresponsible. The success of the work led to the National Socialist party to attack the composer in the press which eventually led to Hindemith taking an indefinite leave from his teaching position.

In 1940, Hindemith immigrated to the USA a few months following the outbreak of World War II. Suffering an uncharacteristic depression when arriving in the USA, he didn’t find relief from it until he was invited to teach a series of guest lectures at Yale University. He was offered a visiting professorship there and, having impressed many of his students from Tanglewood, they followed him to Yale. In 1946, Hindemith formally became an American citizen and bought a home in New Haven, Connecticut.

In 1949, Hindemith returned to Europe when he accepted a teaching position at the University of Zürich. Settling in Switzerland in 1953, he spent the remainder of his life in Blonay above Lake Geneva. Hindemith died unexpectedly in December 1963 in Frankfurt.