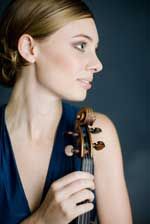 Lily Francis was a top prizewinner at the 2009 ARD Music Competition in Munich and has performed with several of the leading orchestras in Germany, including the Bavarian Radio Symphony Orchestra, the Munich Chamber Orchestra and the Munich Radio Orchestra. In 2008, she made her Weill Recital Hall debut and plays regularly in the USA and throughout Europe. From 2006-2009, Ms. Francis was a member of the Chamber Music Society of Lincoln Center CMS Two program, and this season she will perform at the Chamber Music Society of Lincoln Center and as a concertmaster of the Vienna Chamber Orchestra . Recent festival appearances have included Marlboro, Santa Fe Chamber Music Festival, the Bravo! Vail Festival and the International Musicians Seminar at Prussia Cove, Cornwall U.K. Ms. Francis has collaborated with some of the leading musicians of our time, including Mitsuko Uchida, Arnold Steinhardt, Kim Kashkashian, Paul Neubauer, Ani Kavafian, and Ida Kavafian. As the violist of the Vertigo String Quartet, she recorded the soundtrack for the acclaimed play Opus, by Michael Hollinger. A graduate of the Curtis Institite (B.M.'06) and New England Conservatory (M.M.'08), Ms. Francis studied with Joseph Silverstein and Miriam Fried. Other teachers have included Philip Setzer, Brian Lewis, Teri Einfeldt, Steve Tenenbom, and Gerhard Schulz.