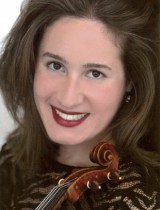 Ms Bar-Josef's solo appearances have included the National Symphony, Boston Symphony, Boston Pops, St. Louis Symphony, National Philharmonic, and Britt Festival Orchestras.  An active chamber musician, she has performed at the Seattle Chamber Music Festival, Bay Chamber Festival (ME), Tanglewood, Aspen Music Festival, and festivals in Portland (ME), Kingston (RI), Steamboat Springs, Garth Newel, and Caramoor, where she performed piano quartets with Andre Previn at his Rising Stars festival.  She was a founding member of the Kennedy Center Chamber Players for nine years, and is a founding member of the Dryden Quartet.


Ms Bar-Josef has been a featured guest on National Public Radio's Weekend Edition and has had the honor of performing at the White House and German Embassy in DC with Maestro Christoph Eschenbach.  She is currently playing on a J.B. Vuillaume dated 1871, generously on loan to her from the Library of Congress.