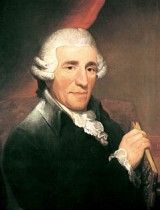 Franz Joseph Haydn was among the epitome of the Classical period and his influence as an instructor on later composers is immense (including pupil Ludwig van Beethoven). Haydn is remembered as being the first great symphonist and the composer who popularized the string quartet. He found financial security as the court composer to the Esterhazy family of Hungary. By the end of the 18th century, Haydn had become the most famous and influential composer in Europe. Haydn’s music reflects the tastes of his patrons, but also the emerging middle-class audiences. His compositions exemplify the Enlightenment artistic ideal of balancing the structural clarity with emotional content. In Haydn’s symphony No 94 (called “Surprise Symphony”), his sense of humor is evident in the second movement with his use of exaggerated and contrasting dynamics.