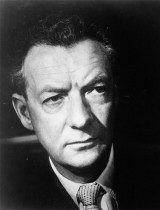 Benjamin Britten remains a dominating presence among 20th century English composers. This was not always the case during his lifetime, when his passionate pacifism and homosexuality brought criticism during World War II. Today he is regarded as one of his country’s most gifted composers. A master at setting the English language, and a Romantic tonally-centered composer with an uncanny knack for incorporation potent modernisms into essentially conservative scores, Britten attained great success with his moody, dramatic opera, Peter Grimes, in 1945. Other major works include the Serenade for Tenor, Horn and Strings, Spring Symphony and the War Requiem.