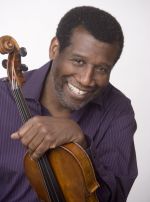 Marcus Thompson is a distinguished performer both on viola and viola d'amore. A multi-faceted artist, he is equally esteemed as recitalist, orchestral soloist, chamber musician, recording artist and educator.

Born in New York's South Bronx, he began violin studies at the age of six in a private studio, and at fourteen attended The Juilliard School Pre-College where he studied with Louise Behrend. After completing seven years of viola and viola d'amore studies with Walter Trampler, he received his Bachelors and Master's degrees, and Juilliard's first doctorate in viola performance.

A much sought-after chamber musician, Mr. Thompson has appeared as the guest of the Audubon, Borromeo, Cleveland, Emerson, Miami, Muir, Orion, Shanghai, and Vermeer Quartets. And has also collaborated with the Fine Arts, Endellion, St. Petersburg, Biava, Jupiter, Vogler, and Oregon Quartets. He has participated in chamber music festivals in Rockport (MA and ME), Chestnut Hill (CT), Sitka (AK), Anchorage, Seattle, Northwest (OR), Los Angeles, Okinawa, Santa Fe, Vail, Dubrovnik, Spoleto, Montreal, and Rio de Janeiro. Among his career highlights are performances with the Chamber Music Society of Lincoln Center in a 'Live from Lincoln Center' broadcast and at a Presidential Inaugural Concert at the Kennedy Center. He has also appeared with the Chamber Music Society of Amsterdam in Holland, and with the Boston Chamber Music Society of which he is an Artist Member. His website is http://web.mit.edu/bratsche/www/index.html.