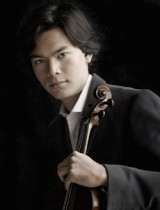 In the 2012/13 season, Jackiw makes his Carnegie Hall recital debut in November, when he performs Stravinsky, Brahms, Strauss and a world premiere work by David Fulmer with pianist Anna Polonsky in Weill Recital Hall. Beyond Carnegie, Jackiw performs recitals throughout the U.S. this season. Other season highlights include performances of the Mendelssohn Concerto at the Detroit Symphony with James Gaffigan, with the Royal Philharmonic under Charles Dutoit, and with the Netherlands Philharmonic and Louie Langree; Mozart’s Violin Concerto No. 3 with the BBC Scottish Symphony Orchestra and The Hague Philharmonic; Mozart’s Violin Concerto No. 5 with the Melbourne Symphony and Sir Andrew Davis; and the South American premiere of a concerto by Osvaldo Golijov with the Sao Paolo Symphony and Marin Alsop.


Jackiw made his European debut in London in 2002 to great critical acclaim, playing the Mendelssohn Violin Concerto with the Philharmonia Orchestra under Benjamin Zander. Jackiw has also performed abroad with the Orchestre Philharmonique de Strasbourg, the Bournemouth Symphony Orchestra, l’Orchestra del Maggio Musicale Fiorentino, the Royal Liverpool Philharmonic, the Ulster Orchestra of Ireland, the Seoul Philharmonic, and the Deutsches Symphonie-Orchester Berlin. In North America, Jackiw has appeared with the Boston, Chicago, San Francisco, Toronto, Baltimore, Pittsburgh, Cincinnati and Seattle Symphonies, the orchestras of Philadelphia and Cleveland, and the New York Philharmonic.

Jackiw is also an active recitalist and chamber musician. He has performed in numerous important festivals and concert series, including the Aspen Music Festival, Ravinia Festival, and Caramoor International Music Festival, the Celebrity Series of Boston, New York’s Mostly Mozart Festival, the Metropolitan Museum of Art, the Washington Performing Arts Society and the Louvre Recital Series in Paris. He is a regular participant at the Bridgehampton Chamber Music Festival, the Bravo! Vail Valley Music, and Bard Music Festivals. At the opening night of Carnegie Hall’s Zankel Hall in New York, Jackiw was the only young artist invited to perform, playing alongside such artists as Emanuel Ax, Renée Fleming, Evgeny Kissin, and James Levine.

On disc, Jackiw is garnering acclaim for his debut album of the Brahms Violin Sonatas with pianist Max Levinson (Sony).

Born in 1985 to physicist parents of Korean and German descent, Stefan Jackiw began playing the violin at the age of four. His teachers have included Zinaida Gilels, Michèle Auclair, and Donald Weilerstein. He holds a Bachelor of Arts from Harvard University, as well as an Artist Diploma from the New England Conservatory. In 2002, the young artist was awarded the prestigious Avery Fisher Career Grant. He makes his home in New York City.