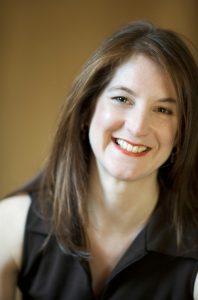 Lisa Bielawa is an award-winning composer and vocalist and the selected composer for the 2017 Summer Festival Commissioning Club. Her new work Fictional Migrations is a trio for flute, horn, and piano. She came to Seattle to speak with members of the Commissioning Club in early June and we had the chance to sit down with her and talk about her new work that premieres on Monday, July 10:

SCMS: Is this your first trip to Seattle?

Lisa Bielawa: No, I’ve been here quite a lot over the years. I’ve had two appearances at Town Hall. When Joshua Roman was putting together the series a few years ago he brought me, along with Ensemble Variances from Rouen, for one of my works. I was part of their series back in 2006 as well.

I also came when I was part of the Philip Glass ensemble. I love it here, I grew up in San Francisco so I don’t always need the sun. I like that overcast, grey sky.

SCMS: Tell us how you came about writing this piece.

LB: I’ve worked with Andy [pianist Andrew Armstrong] quite a bit over the years. I first met him shortly after I finished Wait [part of the Pre-Concert Recital on July 3]. I was at the Copland House and one night I went to a reception and met him. We stayed in touch over the years and he fell in love with the piece and recorded it.

Andy’s playing is so virtuosic. I love virtuosity, it is really poetic, the pure expression of human capacity. It’s amazing to see what is possible in the expansive end of the technical. Andy has 13 ways to play forte.

James [Ehnes] had talked to Andy and Aaron Jay Kernis and both had recommended me. That’s when I got the call from James to be part of the Summer Festival. 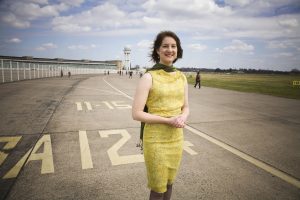 SCMS: How did you get started working on Fictional Migrations? And what were your inspirations?

LB: I was so excited to work with Andy again. We had talked about different combinations of instruments and Andy and James had both talked so highly of Lorna McGhee that I added flute. I wanted to add another instrument and thought about violin, or viola, but I had written a piece for viola, bassoon, and piano that was such a challenge and draining that I wanted to try something else, and we settled on horn.

Before I start a new work I need a fallow period where I can generate ideas. I had attended a house concert performance of Messaien’s Quartet for the End of Time put together by Josh Roman. It was so intimate and emotional. Here is a piece that came together out of the necessity of the musicians that were available. The circumstances of how individuals come together and create community was inspiring.

Also, I was working on a grants panel and it gave me the center for this piece. It was a wide range of disciplines, I was the leader of the music category, but to see all the art forms and what they were doing was another inspiration. One that really captured my attention was speculative fiction, that ‘what-if’ energy. Here were lots of women of color and it was so refreshing; it worked against the constant expectation, it was politically engaged and hopeful.

It got me thinking, along with Messiaen’s ornithological focus, what if I had a bird with a 5 octave range? I can have birds of so many sizes. The birds of my land can have whatever bird sounds I want, even when they aren’t always plausible.

I started out with a book called Imaginary Birds by Joe Nigg. But as I was reading, I felt that so many birds across cultures have too many meanings, they can be so emotionally charged, or dark, or scary. There was one Greek story that stood out to me in particular, though. Alcyone, where the term halcyon originates from, and her lover. He did something to anger the gods and they dashed him upon the rocks. She spent a long time searching for him until finally someone told her what had happened to him. She was going to throw herself into the sea when she was transformed into a bird and saw that her lover, too, had been transformed into a bird and they flew off together. This story was a perfect example of speculative fiction.

This is an emotional work about what could be. The piece is broken into six discreet movements that only the musicians will recognize. One is called “Birds who fly through walls”. It captures the urgency of the story and Andy’s playing is so perfect. I really want to get out from under the cares of the world, whether that is relationships, our daily lives, whatever is going on in the world. 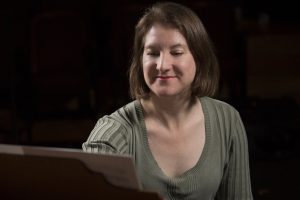 SCMS: When did James approach you about this new composition?

LB: It was about a year ago. That is a pretty short period. I always need a fallow period before I can sit down and start writing a new piece. All my works come out of that soup of inspiration. I’ll be thinking about a piece, but it is also about living life and letting those ideas gestate. I need to be aware of the world that I can write about so I can find that emotional and intellectual center for a new work. As a composer I am not as concerned about a sound palette, like Debussy. My music is about people – I’m a very social person and am always aware that musicians are people in that moment of music making. My music always has a textual connection, and the exact text is very important to me. Words have great meaning, so it is important to get them just right.

SCMS: What is on the horizon for you?

It has been a busy year! I finished Vireo (an online, episodic opera) in January, another piece in April, the SCMS composition just a few weeks ago, and have another work to finish by mid-July. I am at an age where I’m not always running on adrenaline, I’m not riding the high. I love what I do and I’ve created a structure so that I really belong to the work. Right now I am finishing up a piece for voice and brass for the New Amsterdam Singers, a group I’ve worked with for a long time. This is their 50th Anniversary, and Clara Longstreth is still the artistic director there.