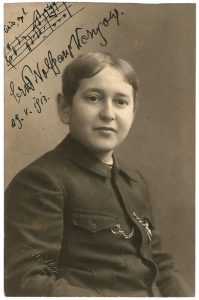 As some of you may remember, I wrote a little essay this past spring professing my love for Erich Wolfgang Korngold’s music, specifically his Piano Quintet, which we were due to perform at this past summer’s festival. Some of you may also remember that the planned performance never took place, due to an unfortunate kitchen injury suffered by the pianist! I’m happy to report that the affected musician made a quick and full recovery, and will be performing the Piano Quintet at our Summer Festival in July. But, in the meantime, there’s more Korngold to savor: his magnificent String Sextet, Op. 10, which we will be performing on January 19th on the opening concert of our 2018 Winter Festival.

I first discovered this work at a summer festival in Germany when I was in my early twenties. At that point, I was not familiar with much of Korngold’s music beyond his glorious violin concerto, which has been a favorite since my teenage years. Unraveling the beauties of this sextet with my German colleagues was an amazing experience. The complexity and density of the writing was, at first, unnerving; we couldn’t make heads or tails of large swaths of the music. But as we digested the score and refined our ideas, an amazing transformation took place: harmony became rich and clear, melodies began to soar. My infatuation with the piece turned into a full-on love affair.

I hope you will join us at Nordstrom Recital Hall on January 19th, and that you will be moved by this masterpiece as much as I am!