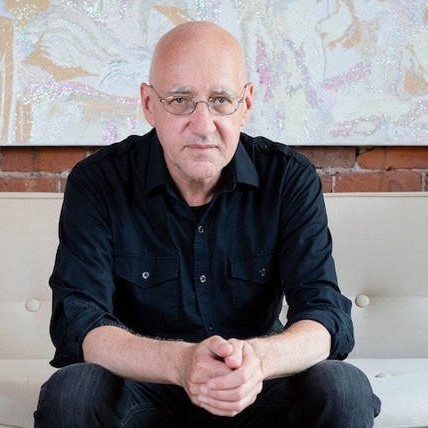 Sebastian Currier is the  recipient of the prestigious Grawemeyer Award.  Heralded as “music with a distinctive voice” by the New York Times and as “lyrical, colorful, firmly rooted in tradition, but absolutely new” by the Washington Post, his music has been performed at major venues worldwide by acclaimed artists and orchestras, including Anne-Sophie Mutter, the Berlin Philharmonic, the New York Philharmonic, and the Kronos Quartet.

His music has been enthusiastically embraced by violinist Anne-Sophie Mutter, for whom he wrote Time Machines, which she premiered with the New York Philharmonic in June 2011 and subsequently performed with various orchestras in the United States, Europe, and Asia.  He also wrote Aftersong for her,  which she performed extensively in the US and Europe, including Carnegie Hall in New York, the Barbican in London, and the Grosses Festspielhaus in Salzburg.  A critic from the London Times said, “if all his pieces are as emotionally charged and ingenious in their use of rethought tonality as this, give me more.”

His orchestra piece, Divisions, was recently premiered by the Seattle Symphony, conducted by Ludovic Morlot,  and will be performed by the Boston Symphony both in Boston and New York, conducted by Andris Nelsons. His Microsymph, referred to by the composer as a large-scale symphony that has been squeezed into only ten minutes, was commissioned by the American Composers Orchestra and premiered at Carnegie Hall. It has also been performed by such orchestras as the San Francisco Symphony, the Gewandhaus Orchestra, the BBC Wales Orchestra and the National Symphony Orchestra, and has been recorded by the Frankfurt Radio Orchestra with Hugh Wolff, conductor.

He has also written works that involve electronic media and video. Nightmaze, a multimedia piece based on a text of Thomas Bolt in which the protagonist dreams he is rushing along a dark, enormous highway, where strange road signs loom up only to disappear into the night, has been performed by Network for New Music and the Mosaic Ensemble. The Philadelphia Inquirer said “every turn is breathtaking” and the New York Times, “Currier’s rich and imaginative music sets the right tone, with its fractured and dissonant baroque-like gestures leading off like highway exits into the void and hinting at distant reservoirs of emotion and yearning.”

Recordings include his Time Machines, recorded by Anne-Sophie Mutter and the New York Philharmonic for Deutsche Grammophon,  Next Atlantis with the Ying Quartet on Naxos, and “On the Verge” from Music from Copland House, featuring his Grawemeyer Award-winning Static, and other chamber works. His “Quartetset/Quiet Time” album, recorded by the Cassatt Quartet, says Anne Midgette for The New York Times, “…distances the present from the past, causing the listener to think about music itself.”

He has received many prestigious awards including the Berlin Prize, Rome Prize, a Guggenheim Fellowship, a fellowship from the National Endowment for the Arts, and an Academy Award from the American Academy of Arts and Letters, and has held residencies at the MacDowell and Yaddo colonies. He received a DMA from the Juilliard School and from 1999-2007 taught at Columbia University.  He is currently Artist in Residence at the Institute for Advanced Study, in Princeton, New Jersey.