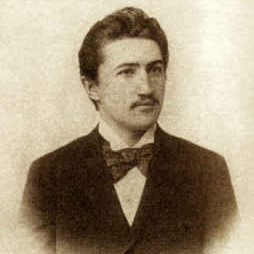 Czech composer Josef Suk was born in 1874. In his early years he learned to play the violin, piano and organ from his father, Josef Suk Sr., a choral director. In 1885 at age 11, Suk entered the Prague Conservatory. In 1891 he received his diploma with his Op. 1 Piano Quartet as his thesis, however he remained at the conservatory for an additional year to study with the new professor, Antonín Dvorák. The two became close friends and then family in 1898 when Suk married Otilie, Dvorák’s daughter.

Early compositional style can be classified as a late Romantic style. Found success not in chamber music, but in pieces for the violin, piano, and orchestra as well as solo piano works such as the Song of Love from the six piano pieces of Op. 7 which became a standard recital piece. Suk never approached opera, however he did write incidental music for the play Radúz Mahulena. Compositions from around the time his son was born have particularly optimistic moods which are evident in the piano suites Jaro (Spring) Op. 22 and Letní dojmi Op. 22b, both written in 1902.

The deaths of his father-in-law Dvorák in 1904 followed by his wife in 1905 marked the beginning of Suk’s second phase with their devastating impact. The compositions following these events are introspective, complex and infused with emotion. He began to undertake the composition of larger works such as his symphony Asrael, Op. 27, experiment with polytonality such as the symphonic poem Zrání (Ripening) and later with Epilog in 1929 in which he expanded upon his use of soloists and chorus within the symphony.

Unlike many of the other Czech composers of the time, Suk did not incorporate folk or literary motifs into his compositions. Suks composing times were scheduled around his careers as performer with the Czech Quartet which lasted nearly forty years and teacher at the Prague Conservatory where he would eventually teach fellow composers such as Martinü, Jezek, and Borkovec. Suk was appointed head of the Conservatory twice, serving from 1924 to 26 and again from 1933 to 1935 when he died at the age of 61.