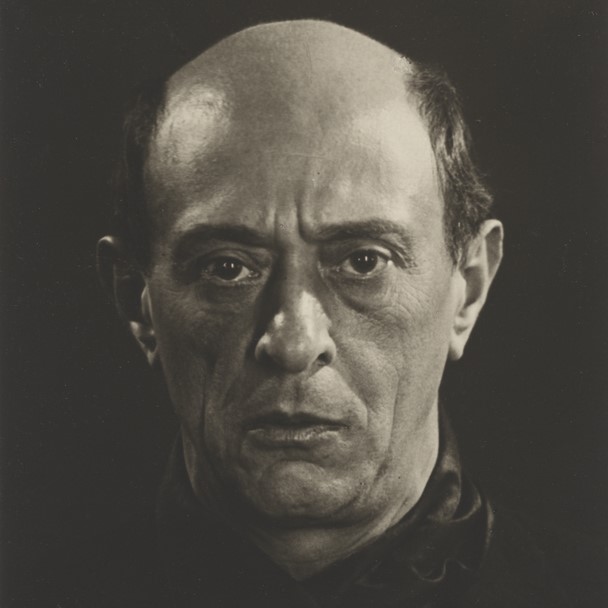 Austrian-American composer Arnold Schoenberg introduced serialism and the 12-tone row, and he is celebrated as one of the most influential teachers of the 20th century with students including Alban Berg and Anton Webern.

Born in Vienna to a shoemaker, Schoenberg began composing at an early age pieces for two violins which he would then play with his teacher or his cousin as his parents were not musically talented. He was encouraged by Austrian musician, physician, and astronomer Oskar Adler to learn the cello and Schoenberg quickly began composing quartets. In 1890, Schoenberg’s father died and he went to work as a bank clerk until 1895 to assist with family finances. During this time, Schoenberg met Alexander von Zemlinsky, a composer and conductor of the Polyhymnia Orchestra in which Schoenberg played the cello. Zemlinsky instructed Schönberg on harmony, counterpoint and composition which resulted in Schoenberg’s first published work String Quartet in D Major (1897).

In 1899, Schoenberg composed the string sextet Verklärte Nacht (Transfigured Night) which is a highly romantic piece of program music based on the poem by Richard Dehmel of the same name, however it would not be performed until 1903 where it received violent rejection by the public due to its programmatic nature and harmonies. In 1901, Schoenberg moved to Berlin where he served for a short time as musical director at the Überbrettl until Strauss came to his aid by helping him secure both a position as instructor of composition at the Stern Conservatory and the Liszt stipend awarded by the Society for German Music.

Schoenberg’s next major work was the String Quartet No. 1 in D Minor, Op. 7 (1904), a 50-minute work, received mixed reviews at its premiere in 1907 due to its unconventional structure which blended all four traditional movements into one. In 1906, Schoenberg composed the Chamber Symphony in E Major which is designed for a smaller group of 15 instruments. It was during this time that Schoenberg’s role and influence as a teacher grew as he took on Berg and Webern as students and, in turn, Schoenberg as a composer also grew from the collaborative efforts with his students.

As Schoenberg developed as a composer, his compositions began to abandon traditional tonality. While many theorists will call his work atonal, Schoenberg referred to these pieces without a tonal center as “pantonal” implying that the piece contains all keys rather than existing without one as atonal implies. In 1911, Schoenberg returned to Berlin and, in 1915, had to report for service in the Austrian army until 1917 when he was discharged for medical reasons. During his time of military service, Schoenberg’s compositional output ceased but he used that time to meditate on a compositional puzzle he had been facing. In 1921 he premiered his solution with the introduction of the 12-ton row in his Piano Suite, Op. 25. The 12-tone row is a special arrangement of the 12 different tones in western music. When working with a 12-tone row, all melodies and harmonies must be derived from the row.

Using this method, Schoenberg composed the opera Moses und Aron (1930). While at the height of his career (his teaching was well received and his works gaining acclaim) the rise of the National Socialist movement caused him to be dismissed from his teaching position and he immigrated to the United States in 1933 where he took a position at the Malkin Conservatory in Boston. A year later he moved to California where he would remain for the remainder of his life and began a teaching position at the University of Southern California (1935-36) and then the University of California at Los Angeles (1936-44). During his years in America, Schoenberg continued to perfect his use of the 12-tone method as well as compose works which embrace his Jewish heritage. Schoenberg died in 1951.