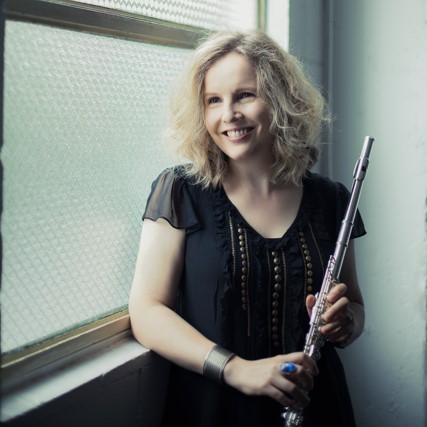 Scottish-born Lorna McGhee is principal flute with the Pittsburgh Symphony Orchestra. She has performed as guest principal with the Chicago Symphony, London Symphony, London Philharmonic, Academy of St Martin in the Fields, and Chamber Orchestra of Europe. Before immigrating to North America in 1998, McGhee was co-principal flute of the BBC Symphony Orchestra, England. As a soloist, she has given concerto performances with the London Symphony Orchestra, Scottish Chamber Orchestra, BBC Scottish Symphony Orchestra, Toronto Philharmonia, Victoria Symphony, Nashville Chamber Orchestra, Oregon Bach Festival Orchestra and Pittsburgh Symphony including a performance of Penderecki’s Flute Concerto under the baton of the composer. As a chamber musician and recitalist, she has performed in Europe, North America, Asia, and Australia in such venues as London’s Wigmore Hall, Edinburgh International Festival, the Louvre, Paris, the Schubertsaal of Vienna’s Konzerthaus and the Library of Congress. In addition to many chamber music recordings, she has recorded a solo CD entitled, The Hour of Dreaming. McGhee is an honorary Fellow of the Royal Academy of Music. She joined the flute faculty of Carnegie Mellon University in 2015 and is a member of Trio Verlaine.