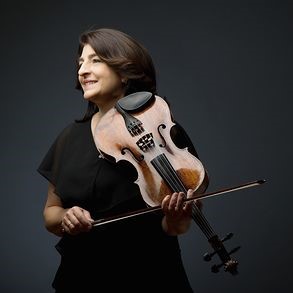 Founder and Artistic Director of the Orcas Island Chamber Music Festival, Aloysia Friedmann is on the national board of Chamber Music America, and in December 2018, was given the special honor of being named a Musical America Top Professional of the Year. Friedmann graduated from The Juilliard School. She had a special onstage role on Broadway alongside Dustin Hoffman in the Merchant of Venice. In Houston, she is the associate concertmaster of the River Oaks Chamber Orchestra and is a frequent guest artist at Da Camera and Rice University. This past season Friedmann toured the Pacific Northwest, Vietnam and France with pianist Jon Kimura Parker. Recent festivals include Mainly Mozart, Sarasota, Hong Kong, Santa Fe, and Chamber Music Northwest. She performs with the Montrose Trio, the Miró Quartet and the New Orford String Quartet. Friedmann was recently the guest soloist in a Benaroya Hall performance of the Handel-Casadesus Viola Concerto, and also appeared with Frederica von Stade in the 25th Anniversary Gala of the Noe Valley Chamber Music Series, giving the world premiere of Heggie’s Meditation.