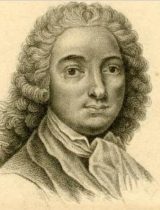 Baroque, French composer Jean-Marie LeClair the Elder is considered the father of the modern French violin school. Celebrated for being a composer of the violin who created music that was not imitative, but distinctively its own. He combined his Parisian musical heritage with the Italian sonata style and his technical skills, earning him the nickname of the “French Bach”.

Born to a lacemaker and cellist, Jean-Marie LeClair l’aîné, the eldest of four musically talented boys, was skilled in lacemaking, dance, and the violin by adulthood. In 1716, he wedded ballerina Rose Casthanie of the Lyon Opera. He was awarded the position of principal dancer and ballet master in 1722 at Turin. In 1723, LeClair relocated to Paris where he published his First Book of Sonatas for Violin with Basso Continuo. Here he found financial support from Monsieur Bonnier and a promising student in Bonnier’s son. Continuing to dance, LeClair went to Turin as premier dancer at the Teatro Regio. He began studying violin technique under Giovanni Battista Somis and launched a career as a violinist. LeClair returned to Paris and, in 1728, published his Second Book of Sonatas for Violin and/or Traverse Flute. In 1730, a widower, LeClair remarried to Louise Roussel. In 1733, LeClair was appointed to the musical court of Louis XV, to whom LeClair’s Third Book of Sonatas were dedicated. From 1738, until 1743, LeClair served three months each year at the court of the Princess of Orange, working on his opera Scylla et Glaucus which was performed in 1746. From 1740 until his death, he served the Duke of Gramont composing pieces to accompany the staged works performed in the Duke’s private theatre including pieces for Les danger des épreuves (1749) and Apollon et Climéne which was composed for Les amusemens lyriques (1750). In 1758, LeClair and his second wife separated.

Jean-Marie LeClair died October 25th, 1764, having been murdered in front of his house. His wife was a suspect, facing financial gain in the selling of his possessions, along with his nephew, Guillaume-François Vial, out of jealousy and envy. Despite having suspects with clear motives, police were unable to solve the mystery and the case lies unsolved today. While LeClair wrote suites, sonatas, concertos, an opera, vocal works, ballets, and stage music during his lifetime, a great portion of it is lost.