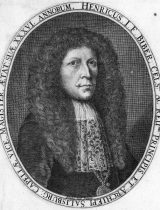 Heinrich Ignaz Franz Biber was born in Wartenberg, Bohemia (now Stráž pod Ralskem, Czech Republic) in 1644. Little is known about his early education, other than that he may have studied at a Jesuit Gymnasium at Opava in Bohemia, and that he may have had musical education by a local organist. Before 1668 Biber worked at the court of Prince Johann Seyfried von Eggenberg in Graz, and then was employed by the Bishop of Olomouc, Karl II von Liechtenstein-Kastelkorn, in Kroměříž. Biber made his reputation as a skilled violinist.

In 1670 Biber entered the employ of the Archbishop of Salzburg, Maximilian Gandolph von Kuenburg. Because Karl and Maximilian were friends,  Biber's former employer refrained from taking any action. Biber remained in Salzburg for the rest of his life.

His musical and social careers flourished: he started publishing his music in 1676, performed before the Emperor Leopold I in 1677, became deputy Kapellmeister at Salzburg in 1679 and Kapellmeister in 1684. In 1690 Biber was raised to nobility by the Emperor, with the title of Biber von Bibern. Finally, the new Archbishop of Salzburg, Johann Ernst, Count Thun, appointed Biber lord high steward.

The composer was married on 30 May 1672 at the Bishop's summer residence, Hellbrunn Palace, just outside Salzburg. His wife Maria Weiss was a daughter of a Salzburg merchant, citizen and tradesman, Peter Weiss. Together they had 11 children, four of whom survived to adulthood. Anton Heinrich (1679–1742) and Karl Heinrich (1681–1749) both served as violinists at the Salzburg court, and the latter was promoted to Kapellmeister in 1743. Anna Magdalena (1677–1742) became a nun Nonnberg Abbey. She was an alto singer and a violinist, and in 1727 became director of the choir and the Kapelle of the Abbey.

Biber died in Salzburg in 1704, and his grave is located in Petersfriedhof.