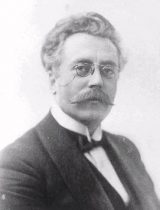 British composer, Frank Bridge was born in 1879 and began his musical career under the tutelage of his father at age six when he began his study of the violin. As a teenager he took on a position within his father’s theatre orchestra as both violinist and arranger. As a composer, his early works display an evident process of refinement and growing expression. His style continued to grow as he became a master of tone poetry with warm lyricism displayed in his later works.

In 1903, with influences from Liszt and Tchaikovsky, Bridge finished a Symphonic Poem (later named Mid of the Night) which he conducted himself in 1904 in London’s St. James’s Hall. His personal style didn’t shine through until the symphonic poem Isabella (1907) which is based on a John Keats poem by the same name. With his lyrical and concise style taking shape, Bridge explored new challenges in his Dance Rhapsody (1908) creating a virtuosic and flamboyant orchestral sound while incorporating melodic charm and showcasing the horns.

In 1910, Bridge served as the Musical Director at London’s Savoy Theatre for a short opera season during which he composed Five Entr’actes for the orchestra which are tuneful well-crafted miniatures suited for an orchestra whose members are young, but talented. Bridge’s 1913 Dance Poem marks a milestone in Bridge’s compositional development. Each of the six movements portrays the depth of emotion displayed by a dancer’s movements. This piece features flexible motivic shapes overlaying a rich harmony and purposeful orchestral gestures (much like Debussy’s Jeux and Ravel’s La Valse).

In 1922, Bridge met Elizabeth Sprague Coolidge, an American music patron with whom Bridge and his wife formed a lifelong friendship. Mrs. Coolidge financially supported Bridge for the remainder of his life by providing an annual grant and regular performances in her Festivals of Contemporary Chamber Music. Bridge was the only composer whom Mrs. Coolidge supported in this way regularly. He dedicated himself to composing for the next 11 years, until he became frustrated with lack of recognition. For four years he composed very little as his health deteriorated. Bridge died in 1941. After his death, however, Benjamin Britten, who had spent time with the Bridges as a child, championed his music.

While Bridge’s early works were much more Impressionistic, World War I took its toll on Bridge and his music became much darker, abstract, and experimental with his later works taking on an almost 12-tone nature. Bridge did not compose in a nationalist style. In a time where emphasis was being placed on acknowledging heritage and home country, Bridge’s international style may have been a contributing factor to his lack of recognition during his lifetime.