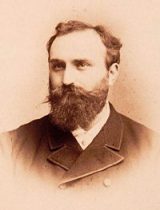 Ernest Chausson, coming from a well-off family, practiced law at the request of his father, and nurtured his lifelong interest in music never needing to pursue the life of a professional musician. In 1877, Chausson was sworn in as a lawyer and also composed his first work. Two years later, after attending a performance of Wagner’s Tristan und Isolde the urge to devote himself to composition took over and he entered the Paris Conservatory the following year studying with Massenet and private instruction from Franck. With his compositional style and skill flourishing quickly, some of his earlier works are still regarded as masterpieces, Seven Melodies, Op. 2, in particular. In 1886, Chausson became the secretary of the Société Nationale de Musique and a full-fledged member of the Parisian musical community. Chausson died in 1899 from injuries sustained in a bicycling accident, leaving behind a moderately sized compositional catalogue which bridges the gap between the times of Franck and Debussy.

While composing works for voice, orchestra, choral, and operas, Chausson is best known for his songs and his chamber music. Some of the highlights of his chamber music catalogue are his Concerto for piano, violin, and string quartet, Op. 21 (1891) and his Piano Quartet, Op. 30 (1897). Chausson was purposeful and effective in his compositional style while maintaining passion and rich chromaticism.