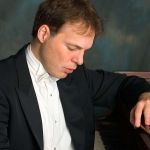 In recent seasons, Mr. Goldstein has played with the Philadelphia, San Francisco, Houston, Baltimore, Seattle, Vancouver, and Saint Louis Symphony orchestras under such conductors as Raphael Frübeck de Burgos, Peter Oundjian, and Leon Fleisher. Other recent highlights include recitals at the Metropolitan Museum and Peoples' Symphony Concerts in New York, the Dame Myra Hess Memorial concert series in Chicago, The Phillips Collection and Strathmore Hall in Washington DC. Recent international appearances include the Jerusalem Camerata and the Orchestre National de l'Ile de France in addition to closing the 2004 "Proms at St. Judes" festival in London. This season, he has made his debuts with the Dallas Symphony and with the Los Angeles Philharmonic at the Hollywood Bowl, given recitals at the Ravinia Festival and Bard Music Festival, and performed with the Bulgarian National Radio Orchestra, the "George Enescu" Philharmonic in Bucharest, the Orchestra Sinfonica Siciliana, and at the Kremlin in Moscow. Mr. Goldstein earned his masters degree from the Peabody Conservatory, where he worked intensively with Leon Fleisher.