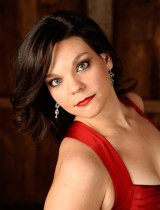 Rena Harms performs with the Seattle Symphony as the soprano soloist for Beethoven’s Symphony No. 9 during the 2014-2015 season.

The soprano made her English National Opera debut as Amelia in a new production by Dmitri Tcherniakov of Simon Boccanegra and joined Theater Basel for the roles as the Contessa in Le nozze di Figaro, Donna Elvira in Don Giovanni, the High Priestess in Aida, and a Flower Maiden in Parsifal. In the US, her other recent performances include Micaëla in Carmen with Opera Santa Barbara and Opera Southwest as well as first performances of Fiordiligi in Così fan tutte, Helena in A Midsummer Night’s Dream, and Ericlea in Il ritorno d’Ulisse in patria with Wolf Trap Opera. She sang Mimì in La bohème with Los Angeles Opera, where she recently completed her tenure as a member of the company’s prestigious Domingo-Thornton Young Artist Program. Also with the company, she sang Barena in Jenufa, Erste Magd in Der zerbrochene Krug, along with Zweite Magd in Der Zwerg in a double bill conducted by James Conlon, and Sylvaine in The Merry Widow, in addition to joining the company for its Grammy Award-winning production of The Rise and Fall of the City of Mahagonny. She also sang Nedda in Pagliacci in performances featuring the resident artists as well as Antonia in excerpts of Les contes d’Hoffmann. Ms. Harms is also former participant in San Francisco Opera’s Merola Opera Program where she sang Donna Elvira in Don Giovanni and the title role in excerpts of Arabella in concert. As an Apprentice Artist with Santa Fe Opera, she sang the Contessa in Le nozze di Figaro and Barena in Jenufa in the company’s scenes program.

She made her international debut recently in a concert with Gustavo Dudamel conducting the Orquesta Sinfonica Simón Bolívar in Mexico and has sung Strauss’ Vier letzte Lieder with the Burbank Philharmonic and Santa Fe Community Orchestra. She has also twice joined the Los Angeles Philharmonic for a series of children’s concerts and Music Academy of the West’s Orchestra for Barber’s Knoxville: Summer of 1915.

She was a 2010 Grand Finalist of the Metropolitan Opera National Council. She also won the 2008 Hennings-Fischer Foundation Competition and second prize in the Marcello Viotti International Vocal Competition in Lausanne, Switzerland, in addition to receiving an encouragement award from the Marilyn Horne Foundation. She received her Bachelor of Music from Manhattan School of Music and attended the Music Academy of the West, where she was awarded a merit fellowship.