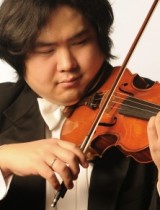 Yosuke Kawasaki’s versatile musicianship allows him to pursue a wide-ranging career of solo, chamber music, and orchestral engagements. Winner of the 2004 S&R Washington Award, the 30-year-old virtuoso currently serves as concertmaster of the Century Orchestra Osaka, and as co-concertmaster of the Mito Chamber Orchestra and Saito Kinen Orchestra in Japan. The latter two ensembles are both under the direction of Seiji Ozawa.

Kawasaki was also concertmaster of the Montgomery Symphony Orchestra from 1999 to 2001, of the Juilliard Orchestra from 1997 to 1998, and of the Juilliard Symphony from 1994 to 1997. He has been guest soloist with Aspen Chamber Symphony, Kyushu Philharmonic, and the Orquesta Filarmonica de Lima, as well as with the three Japanese orchestras of which he is concertmaster. He is a founding member of the D’Amici String Quartet along with world-renowned musicians Federico Agostini, James Creitz and Sadao Harada giving critically acclaimed performances and masterclasses in Europe and Japan. Mr. Kawasaki also maintains a duo with Russian-born pianist Vadim Serebryany, which made its Australian debut collaborating with the cutting edge Mark Morris Dance Group. The duo is known for its interpretation of Beethoven’s Complete Piano and Violin Sonatas which have been performed in the United States and Canada. In New York, Mr. Kawasaki is a member of the Metropolitan Museum Artists in Concert broadcasting live programs on 96.3 FM-WQXR. He is also seen with the Caramoor Virtuosi and makes appearances at the prestigious Barge Music. His most recent recordings include Bach’s Double Concerto with Machiko Shimada and Bach’s Complete Brandenburg Concertos with Walter van Hauwe and the Saito Kinen Chamber Players, both on the King Label.

Mr. Kawasaki began his violin studies at the age of six with his father Masao Kawasaki and continued with Setsu Goto. At the age of ten he was accepted into The Juilliard School Pre-College Division where he won the school-wide concerto competition. He then continued his education and graduated from The Juilliard School in 1998 under the tutorship of Dorothy DeLay, Hyo Kang, Felix Galimir and Joel Smirnoff.