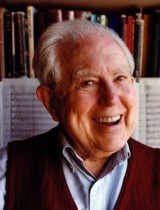 Elliott Carter, composer and teacher, explored the relationships of tempo and texture in his compositions and is recognized as one of the prime innovators of 20th century music. He was encouraged to pursue music by his friend Charles Ives. He studied with Walter Piston, Gustav Holst, and Nadia Boulanger. He has a varied body of works that include the Variations for Orchestra, Symphony of Three Orchestras, concertos and string quartets. In 1960, Carter was awarded his first Pulitzer Prize for his visionary contributions to the string quartet tradition. Stravinsky considered his Double Concerto for Harpsichord, Piano and Two Chamber Orchestras (1961) along with his Piano Concerto (1967) to be “masterpieces”. Hailed by Aaron Copland as “one of America’s most distinguished creative artists in any field” Carter received two Pulitzer Prizes, the Gold Medal for Music from the National Institute of Arts and Letters, the National Medal of Arts, and honorary degrees from many universities. He was an active composer to the end of his life, even at the age of 103.