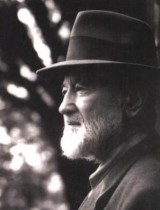 Businessman by day and composer by night, Charles Ives’ vast output has gradually brought him recognition as the most original and significant American composer of the late 19th and early 20th centuries. Finding inspiration in transcendental philosophy, Ives sought highly personalized musical expression through innovative and radical means. Ives found fascination in bi-tonal forms, polyrhythms, and quotation. Much of Ives work remained unheard until after he essentially retired in 1930. Severe health problems led to his retirement from composition. Henry Cowell perhaps played the most significant role in gaining public attention for the works of Ives as he published several of his compositions in his New Music Quarterly. Ives was awarded a Pulitzer Prize for his Symphony No. 3. After his death, his works were championed by many leading conductors, including Leonard Bernstein.