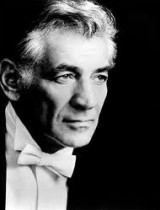 Leonard Bernstein was a world-renowned musician throughout his entire adult life. Besides composing, he was regarded as a premiere conductor; he was Music Director of the New York Philharmonic and conducted the world's major orchestras recording hundreds of performances. His books and the televised Young People's Concerts with the New York Philharmonic also established him as a leading educator. Bernstein composed for the Broadway musical stage, including: On the Town, Wonderful Town, Candide and the immensely popular West Side Story. In addition to the West Side Story collaboration, Mr. Bernstein worked with choreographer Jerome Robbins on three major ballets: Fancy Free, Facsimile and Dybbk. Bernstein was the recipient of many honors, including, the Antoinette Perry Tony Award for Distinguished Achievement in the Theater, eleven Emmy Award, the Lifetime Achievement Grammy Award and the Kennedy Center Honors. Notable compositions include: Jeremiah, The Age of Anxiety, Kaddish, Serenade, Five Anniversaries, Mass, Chichester Psalms, Slava!, Songfest, Divertimento for Orchestra, Missa Brevis, Arias and Barcarolles, Concerto for Orchestra and A Quiet Place.