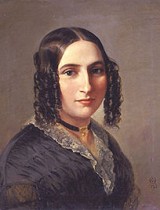 Fanny Mendelssohn-Hensel was a talented pianist and known for her compositions of lieder and chamber music. Sister and companion to Felix Mendelssohn, she was trained musically first by her mother and then with Marie Bigot in Paris and Ludwig Berger in Berlin. Her composition studies were under Carl Friedrich Zelter, however they were greatly discouraged by her father. Mendelssohn composed over 200 lieders (including her famous “Swan Song”), over 100 pieces (including bagatelles, fugues, preludes and sonatas), choral music (the cantata “Oratorium nach den Bildern der Bibel” being most famous) and instrumental music for string and piano. Mendelssohn was closely connected to the artistic scene in her day; she was friends with Clara Schumann, another notable female composer of the time, and was married to Wilhelm Hensel, a painter.