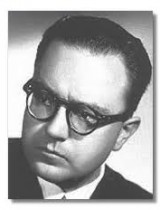 Considered one of the most important Latin American classical style composers, Alberto Ginastera emerged on the international music scene in the late 1940’s and established himself as one of the mid-twentieth century's most distinctive compositional figures. Although he eventually borrowed sonorities and procedures from the surrealist and experimentalist movements of the ensuing decades, he did so selectively and un-dogmatically, synthesizing with ever-increasing sophistication and discretion the echoes of his native Argentina with the expanding compositional palette of the avant-garde. Ginastera attended conservatory in Buenos Aires in the late 1930’s, studied with Aaron Copland at Tanglewood, and returned to Buenos Aires to co-found the League of Composers.