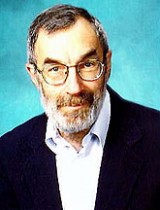 Paul Schoenfield, a native of Detroit, began playing the piano at age six and wrote his first composition the following year. In addition to studying piano with Julius Chajes, Ozan Marsh, and Rudolf Serkin, he holds an undergraduate degree from Carnegie-Mellon University and a Doctor of Music Arts degree from the University of Arizona. He held a teaching position in Toledo, Ohio, lived on a kibbutz in Israel and was a free-lance composer and pianist in the Minneapolis-St. Paul area before moving to Cleveland. He is now on the faculty of the University of Michigan.

Mr. Schoenfield has received commissions and grants from the NEA, The Ohio Arts Commission, Chamber Music America, The Rockefeller Fund, the Minnesota Commissioning Club, American Composers Forum, Soli Deo Gloria of Chicago, The Juilliard School -- for its centennial -- and many other organizations and individuals.

Although he now rarely performs, he was formerly an active pianist, touring the United States, Europe, and South America as a soloist and with groups. His recordings as a pianist include the complete violin and piano works of Bartok with Sergiu Luca. His compositions can be heard on the Angel, Decca, Innova, Vanguard, EMI, Koch, BMG, and the New World labels. A man of many interests, Paul Schoenfield is also an avid scholar of mathematics and Hebrew.