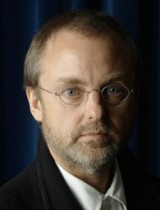 Jacob ter Veldhuis (also known as Jacob TV) is a Dutch avant pop composer who started as a rock musician and studied composition and electronic music at the Groningen Conservatoire, where he was awarded the Dutch Composition Prize in 1980. During the eighties he made a name for himself with melodious compositions, straight from the heart and with great effect. ëI pepper my music with sugar,' he says.

Jacob TV is fascinated  with American media and world events and draws raw material from those sources. His work possesses an explosive strength and raw energy combined with extraordinarily intricate architectural design. Jacob TV makes use of electronics, incorporating sound bytes from political speeches, commercials, interviews, talk shows, and TVangelists to create a colorful mix of high and low culture.

Early in his career, Jacob TV stood up to what he called the 'washed-out avant garde', which made him a controversial figure in certain circles. He strives to liberate new music from its isolation by employing a direct - at times provocative - idiom that spurns 'the dissonant', which in Jacob TV's view reflects a completely devalued means of musical expression.