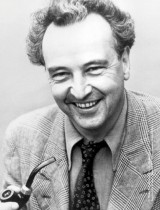 A great train enthusiast, Arthur Honegger is an important composer of the 20th century. Of Swiss nationality, born in France and living most of his life in Paris, he had both French and German musical influences. A member of the famous group Les Six his art is characterized by a great sense of architecture which allows him to mix the different musical languages and techniques of his era. His music serves a humanist concept that is completely in phase with the major questions of the twentieth century. Honegger’s love for locomotives can be witnessed in Mouvement Symphonique (Pacific 231), which gained him early notoriety. The distinguishing characteristics of his music  are his use of counterpoint, driving rhythms, highly coloristic harmonies, melodic amplitude, an impressionistic use of orchestral sonorities, and a concern for formal architecture.