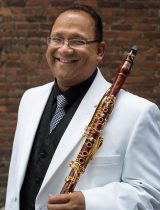 Ricardo Morales joined the Philadelphia Orchestra in 2003 as principal clarinet. Prior to that, he was principal clarinet of the Metropolitan Opera Orchestra, a position he assumed at the age of twenty-one under the direction of James Levine. He has performed as principal clarinet with the New York Philharmonic, Chicago Symphony and, at the invitation of Simon Rattle, with the Berlin Philharmonic as guest principal clarinet. A native of San Juan, Puerto Rico, Morales began his studies at the Escuela Libre de Música, along with his five siblings. He continued his studies at the University of Cincinnati College Conservatory and Indiana University, where he received his Artist Diploma. He has been a featured soloist with many orchestras, performing numerous times with the Chicago Symphony, Metropolitan Opera Orchestra, and Cincinnati Symphony. An active chamber musician, Mr. Morales has performed in the MET Chamber Ensemble series at Carnegie's Weill Recital Hall, at the Santa Fe Chamber Music Festival, Saratoga Chamber Music Festival, Philadelphia Chamber Music Society, and with the Chamber Music Society of Lincoln Center. Morales serves on the faculties Temple University and The Curtis Institute of Music.