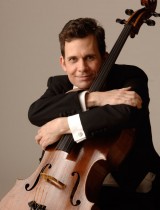 Cellist Brinton Averil Smith continues to win rave reviews for virtuosic performances with musical ideals rooted in the golden age of string playing. His debut recording of Miklós Rózsa’s Cello Concerto with the New Zealand Symphony Orchestra won widespread international critical acclaim, with Gramophone praising Smith as a “hugely eloquent, impassioned soloist,” and his recording of chamber music of Fauré with Gil Shaham was chosen by numerous critics as one of the year's best albums. As a chamber musician, he has collaborated with Yo-Yo Ma, Gil Shaham, Cho-Liang Lin, Lynn Harrell, Sarah Chang, Dawn Upshaw and members of the Beaux Arts Trio and the Guarneri, Emerson, Juilliard, Cleveland, and Berg quartets. Mr. Smith is the principal cellist of the Houston Symphony and a faculty member of the Shepherd School of Music at Rice University. He was previously a member of the New York Philharmonic and the principal cellist of the San Diego and Fort Worth symphonies. His performances have been broadcast throughout the world including, in the US, on CBS Sunday Morning and NPR's Performance Today and Symphonycast . At age 10, Mr. Smith was admitted part-time to Arizona State University, studying mathematics, music and German, and he completed a B.A. in mathematics at age 17. He received his masters and doctoral degrees from Juilliard, studying with renowned cellist Zara Nelsova and writing on the playing of Emanuel Feuermann.