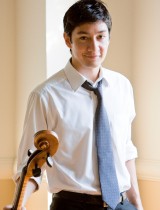 Mr. Requiro has soloed with the Tokyo Philharmonic, National Symphony Orchestra, Seattle Symphony, and and other orchestras across the U.S. His Carnegie Hall debut recital at Weill Hall was followed by a critically acclaimed San Francisco Performances recital at the Herbst Theatre. Soon after making his Kennedy Center debut, Mr. Requiro also completed the cycle of Beethoven’s Sonatas for Piano and Cello at the Phillips Collection in Washington, D.C. Actively involved in contemporary music, he has collaborated with composers Krzysztof Penderecki and Bright Sheng and most recently gave the Dutch premier of Pierre Jalbert’s Sonata for cello and piano at the 2010 Amsterdam Cello Biennale.