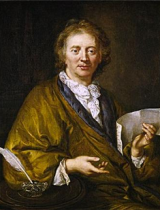 One of France’s greatest baroque composers, François Couperin excelled in all genres of music.  His father and two uncles had been major lights in the previous generation, and the young man himself quickly ascended in the royal succession.  By age 25 he had already been selected by Louis XIV as chief organist at the Royal Chapel. His extensive keyboard music delights in colorful evocations of animals as well as musical homages to famous contemporaries.