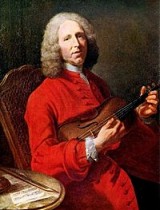 Jean-Philippe Rameau’s father, organist at Dijon, recognized early of his son’s extraordinary musical talent, and allowed him to withdraw from Jesuit studies at 16 years of age to pursue music. As was common, Rameau père sent him to Italy for study and experience, but unlike most visitors from other European countries (from Albrecht Dürer through Handel, Mozart and Wagner), Rameau could not wait to return to France. He met only sporadic success over the next several decades until introduced to Voltaire in the early 1730s, which certainly helped his cause. It was, however, the public’s appetite for his operas that put him on the map. Unlike François Couperin, whose music was written expressly for aristocratic consumption, Rameau aimed for a broader, middle-class public, with one foot still in the Baroque and another tentatively stepping into the rococo.