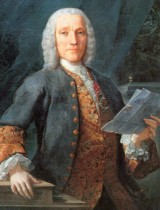 Born the same year as Bach and Handel, Domenico Scarlatti was one of the supreme keyboard players of his time. In 1709, he was declared a superior harpsichordist to Handel, though the latter musician bested him on the organ according to those in attendance. Scarlatti was the son of the celebrated opera composer Alessandro Scarlatti, who served as his first teacher. Young Domenico traveled widely, living in Lisbon for a decade in the employ of Princess Maria Barbara of Portugal until she married the heir to the Spanish throne in 1729, prompting her move to Madrid. Naturally, Scarlatti went along in tow and lived in the Spanish capital for the rest of his life, absorbing and incorporating the unique Moorish-derived musical language into his music. A prolific composer, he wrote more than 500 (!) keyboard sonatas, often mercurial, brilliant and infused with a Spanish “accent.”