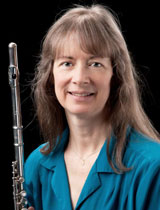 Judy Kriewall has been a member of the Seattle Symphony flute section since 1979 and is also a member of the Seattle Opera orchestra. She received her Bachelor and Master of Music degrees from Northwestern University in Evanston, IL, where she studied flute with Walfrid Kujala. While there, she was a member of the Northwestern University Symphony and also of the Civic Orchestra of Chicago, where she served as a piccoloist and as Principal Flute. While in college, she also played on several occasions with the Chicago Symphony. Kriewall has given several recitals in the Puget Sound region, and has performed on numerous occasions as soloist for the Seattle Symphony’s Basically Baroque, Music of Our Time and Chamber Music series.