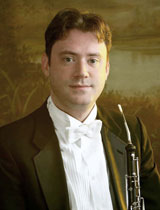 Stefan Farkas is Principal English Horn of the Seattle Symphony. Prior to his appointment in Seattle, he performed in the same capacity with the Houston Symphony. As a freelance artist in New York City, Farkas performed frequently with groups such as the New York Philharmonic, the Metropolitan Opera Orchestra and the New Jersey Symphony. In May 2009 he appeared as soloist with the Seattle Symphony in performances of Donizetti’s Concertino for English Horn. He is a graduate of The Juilliard School, with additional studies at the Manhattan School of Music and Indiana University.