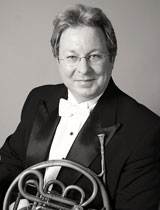 Hailed as “one of today’s superstars of the international brass scene,” William VerMeulen leads a varied musical life of Soloist, Orchestral Principal, Chamber Musician, Master Teacher and Music Publisher. Mr. VerMeulen has been Principal Horn of the Houston Symphony since 1990 and has performed as a guest Principal Horn with many of the nation’s premier orchestras.

As a soloist and chamber musician, he has performed to critical acclaim on four continents and is a popular artist at Horn Symposiums as well as a member of the Advisory Council of the International Horn Society. He has recorded numerous compact discs among which are the Complete Mozart Horn Concerti and the popular Texas Horns. A champion of new music, Mr. VerMeulen has had numerous pieces written for him including concerti by esteemed American composers Samuel Adler and Pierre Jalbert and Anthony DiLorenzo.

In addition, Mr. VerMeulen participates as a performer and on faculty with the finest music festivals and chamber music presenters among which include: Chamber Music Society of Lincoln Center, Aspen, Music@Menlo, Santa Fe, and the Sun Valley Summer Symphony where he also serves as Principal Horn.

Arguably the most successful of horn teachers working today, Mr. VerMeulen is Professor of Horn at the Shepherd School of Music at Rice University. His studio is ranked number one in the country, with students winning positions in orchestras such as Boston, Cleveland, New York, Los Angeles, San Francisco, Dallas, Cincinnati, Houston, Israel, Canadian Brass, and dozens more. He also is on the faculty at the Banff Centre, National Orchestral Institute, New World Symphony, and Texas Music Festival.

Mr. VerMeulen is Founder and President of VerMeulen Music, L.L.C., which offers music and products for horn players worldwide at http://www.vermeulenmusic.com

He is married to Houston Opera and Ballet violinist Sylvia VerMeulen and they have two lovely children named Michael and Nicole. In his rare free time he enjoys having good friends over to share in his passion for fine cooking and wine.