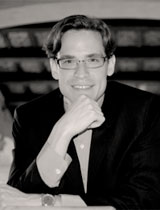 Nathan Hughes is Principal Oboe of the Metropolitan Opera and serves on the faculty of The Juilliard School.  He regularly performs with the MET Chamber Ensemble at Carnegie Hall and has collaborated with such artists as Yefim Bronfman, Richard Goode, James Levine, Gil Shaham, Mitsuko Uchida, and André Watts, among others.  He also has performed with the Philadelphia Chamber Music Society and at such festivals as Aspen, Bridgehampton, Lucerne, Mainly Mozart, Marlboro, Salzburg, Santa Fe, Sarasota, Spoleto, Tanglewood, and Verbier.  He previously served as Principal Oboe of the Seattle Symphony and holds the distinction of having made guest appearances as Principal Oboe with numerous leading American orchestras, including the Chicago Symphony Orchestra, Los Angeles Philharmonic, New York Philharmonic, and San Francisco Symphony.  A dedicated teacher, Hughes has many students who hold positions in major symphony orchestras, including recent appointments to the Atlanta Symphony Orchestra, Cleveland Orchestra, Indianapolis Symphony Orchestra, National Symphony Orchestra, and Toronto Symphony Orchestra.  He has presented masterclasses at the Cleveland Institute of Music, Manhattan School of Music, New World Symphony, National Orchestral Institute, Oberlin Conservatory, Round Top Festival Institute, Toronto’s Royal Conservatory, and the Poznań Academy in Poland.  Born in St. Paul, Minnesota, Hughes had early training in voice and piano.  It was only after he was able to purchase his first oboe through his brother’s winnings from a horse-race bet that he began his commitment to the oboe.  He has earned degrees from The Juilliard School and the Cleveland Institute of Music, from which he was awarded the prestigious Alumni Achievement Award.