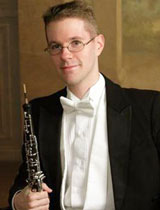 Participant as oboist, pianist, and composer in the  Aspen Music Festival as well as Lake Tahoe Summerfest, one highlight includes his live performance of Richard Strauss’s Oboe Concerto at the Aspen Music Festival, broadcast on National Public Radio.

His first year at the Juilliard School, Ben taught music theory classes weekly—an unprecedented assignment for an incoming student in that school’s history.

His compositions freshly blend Romantic and Classical ideals, and his chamber music has been performed by great artists throughout the US and Europe.  His orchestral compositions have been premiered and recorded by the Seattle Symphony and Michigan State University Symphony Orchestras, and his work has been choreographed by leCirque de la Symphonie with the Seattle Symphony and Alabama Symphony Orchestras.

Principal Oboist of the Seattle Symphony since 2006, Ben Hausmann has held that same position in L’Orchestre symphonique de Québec, the Savannah Symphony, and the Hollywood Bowl Orchestra.  He has served as Principal Keyboardist of the Hilton Head Orchestra and is the founding pianist of The Mahler Trio.  He has been a frequent guest of the Los Angeles Philharmonic, Metropolitan Opera Orchestra, Baltimore Symphony, and was guest principal oboist for the San Francisco Symphony.

An avid recording artist, Ben Hausmann’s current projects include conducting his original orchestral compositions and orchestrations of masterworks for piano.  He is also recording a complete cycle of Mozart’s Sonatas for Piano and Violin, which he has transcribed “for modern piano and oboe,” of which he is recording both parts—which he has also done with Strauss’s virtuosic Violin Sonata—both a first in recording history.  He has also begun a free website called “At Home with the Masters,” where he records the piano parts of beloved classics for anyone to play along with at home, which he records on his wonderful 9-foot concert grand, the Steinway C&A D #299, and Yamaha Avant Grand, in his own living rooms.