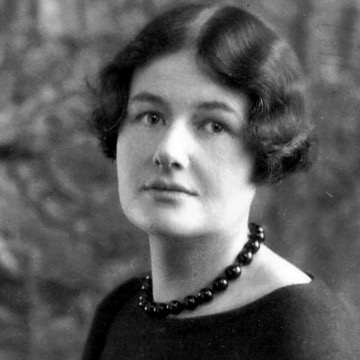 English composer Rebecca Clarke studied music at the Royal Academy of Music beginning in 1903 at the age of 17 where she studied violin. In 1905 she left the academy abruptly after a marriage proposal from her harmony instructor and in 1907 began studies at the Royal Conservatory of Music where she was the first female student of Irish composer Sir Charles Villiers Stanford. Clarke once again had to withdraw from her studies when her father banished her from the family home. Clarke performed on the violin as a means to support herself and, in 1912, she became the first female musician in a fully professional ensemble when she joined the Queen’s Hall orchestra. In 1916, she began a residency in the United States that allowed her to tour extensively throughout the States. During her years of residency, Clarke received recognition as a composer beginning with her Viola Sonata (1919) and her Piano Trio (1921) which were both runners up in the Berkshire Festival of Chamber Music, sponsored by Elizabeth Sprague Coolidge who later commissioned the Rhapsody for Cello and Piano in 1923 making Clarke the only female composer Coolidge commissioned. In 1924, Clarke returned to London where she performed as a soloist and in ensembles during which time her compositional output declined.

With the start of World War II, Clarke returned to America where she resided with her two brothers and their families, allowing her compositional efforts to begin again. In 1942, Clarke accepted a position as a nanny and her work as a composer ceased until she was reunited and, soon after, married to a former classmate in 1944. Her final compositional projects included God Made a Tree (1954) and around 1976 she began revising some of her earlier works, including Cortége and The Tiger.

Clarke’s compositions were often inspired by the strife in her personal life. Clarke had told her family that she “could never work when [she] was in love” demonstrating that when her life was full of peace and contentment, Clarke lacked the inspiration to compose. Clarke’s compositional style has often been compared to that of Ravel, Bloch, and Bridge and was often believed to have been written by someone other than herself since critics did not believe a female could not have produced music of such high caliber. Her works were impressionistic in nature with lush textures and modernistic harmonies. Because of the challenges that faced her a female composer as well as her inconsistent compositional schedule throughout her life, much of Clarke’s works remain unpublished and what was not lost through the years is maintained by her estate the Rebecca Clarke Society, Inc.